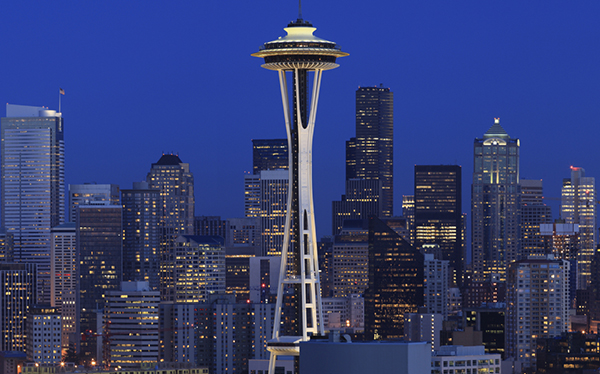 Opened in 1962 for the Seattle World’s Fair, the Space Needle stands at 605 feet tall.

With the coffee culture and all the attractions in Seattle, Washington, it’s easy to imagine that travel nurses could easily be “sleepless” while on assignment there. And, while the city is known for raining, the idea that it gets more than other U.S. cities is actually a myth. Seattle receives less annual rainfall than cities such as New York, Boston and Miami. So, don’t let the Seattleites enjoy the city themselves - be sure to check out some of the fantastic attractions around the Emerald City:

Space Needle
As the defining element of the Seattle skyline, the Space Needle is a great place to get a 360-degree view of Seattle and the surrounding area. Opened in 1962 for the Seattle World’s Fair, Seattle’s top tourist destination stands at 605 feet tall. If you feel like having “food with a view,” the Space Needle also has the Sky City restaurant, which serves brunch during the weekend and lunch and dinner seven days a week.

Pike Place Market
Dubbed as “the soul of Seattle,” Pikes Place Market has been a staple of the city since it opened back in 1907. Home to more than 200 businesses, Pikes Place is the spot to get everything from fresh fruit and vegetables to locally-made clothing and gifts. Also, it is home the original Starbucks and, while the city is teeming with these famous coffee shops, there’s just something about going to the first one.

Harbor Cruises
Located right on Puget Sound, Seattle is a great place to take in a scenic cruise of the city’s waterfront. Shorter cruises typically range from hour-long trips around the harbor to more in-depth themed cruises such as murder mysteries. Be sure to click on the link above if you’d like more details.

Museums
Seattle’s museum scene is bustling with several cultural and historical ones to visit. Immerse yourself in Seattle’s rich Native American and Asian cultures or check out all the glass art the area is famous for. There’s also the opportunity to check out Seattle’s Museum of Flight, where the original Air Force One is on display.

Seattle is just one of the many places travel nurses get to experience when they work with Fastaff Travel Nursing. If you’re looking to learn even more about this great city’s attractions, be sure to check out Seattle’s official visitor site.